“I want to ride my bicycle, I want to ride my bike…” sang Queen years ago. Statistics say this is what you have to do while living in Holland. There are more bikes in The Netherlands than people. Babies are transported on a bike as soon as they can sit. Cycling in a tight skirt and high heels to work is absolutely normal. Grandmothers do it. Politicians and businessmen do it. So you should do it too. Ride your bike!

For many of you, in the countries you come from, cycling is either seen as a sport or leisure. Here in The Netherlands mountain biking and cycle racing are also very popular sports. But everyday cycling is a cultural thing, an everyday basic and not to forget a healthy habit. Growing up in Romania I followed somehow a similar upbringing like any Dutch child: got my first toddler bicycle when I was 2 and I cycled without support wheals by 5. And there it stopped. I only cycled in weekends and after school, going to parks or around the block. I remember when I was about 10 years old I was very late for school and I jumped on my bike. At school the teachers told me it was very inappropriate of me to cycle to school and told me to just use my bike in my free time. So when a couple of years later, when I moved to the Netherlands, on my school supplies shopping list was also a bicycle, I was overjoyed. Of course with that I needed a raining suit as well and as I discovered soon that was no luxury. So I started cycling 8 km to school, discovering the amazing cycling infrastructure and the enduring winds and rains, as much as enjoying the sun and the breeze.

Why is The Netherlands such a bicycle country? Well, first of it, it is very flat. Let’s be honest, unless you live in the most south part of Limburg, the only thing to climb here are over bridges. And believe me, just have a weekend away and try to cycle in the south of Limburg, or Belgium for my part, and then you will understand the luxury of cycling in a flat country.

Secondly, there are many bike paths and the cycling infrastructure is simply amazing. Not only you can cycle on safe paths from one village to another, also in cities there are lots of safe roads and cycle paths.

Thirdly, cyclist are well protected in The Netherlands. You will hardly see anyone wearing a bike helmet or any protection clothes. You are trained to respect the traffic rules in school already, you get an “fietsexamen” and later on when you go for your driving license there is a lot of attention on cyclists. There is a historic reason for it. In the 1960’ and ’70 the number of cars exploded. And because of that, traffic got very busy and many accidents happened. In one year only, 3000 people died in car accidents, 450 children playing on their bikes were killed. People demanded safer cycling conditions, and especially after the 1973 oil crisis, the Dutch government started to invest in improved cycling infrastructure. Even more, urbanologists started to include cycling into urbanization planes. That is why today many cities and new residential areas are “made for cycling”. 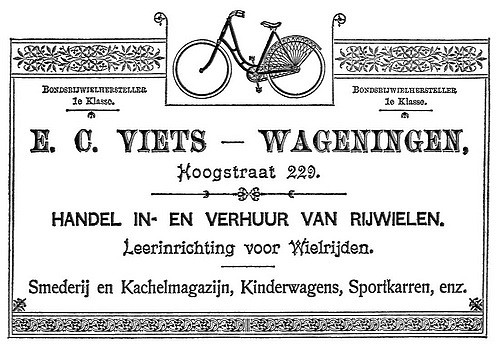 Actually, the first bike-path was built in Utrecht in 1885 already. Back then cycling was an elitist thing, but soon after the bicycle gave the common man his mobility. Did you know that today’s ANWB started as a cyclist association? And did you know that about a century ago there was a bicycle shop owner in Wageningen named Viets, who is supposedly the reason why in Dutch the word for bicycle is “fiets”. Linguists still dispute this issue though.

In a city like Delft, where almost every mean of transport is present, it can be overwhelming as a newcomer to start cycling between the tram, buses, cars and pedestrians. Especially is you are not used to cycle on an everyday basis. You can even be intimidated but Dutch mums transporting 2 or even 3 kids at the same time on one bike, or feel humble when you see a big “bakfiets”. Or you don’t know how to get over a bridge and are afraid of cycling backwards. I would say: take it slow, but do it. Cycling for grocery shopping, to work, to see a friend, to go out for dinner, to see nature, for any of these and more, cycling gives you a lot of freedom and good mood. No parking stress, easy sneaking between small streets, and the feeling of being active and healthy. Just learn how to cycle with a baby chair. Dutch mums also never cycle with a baby chair on their bike before they had their first child: they just learn and do it too. And if you cannot cycle, just dare to try. Ask for help and start learning. It might be challenging to learn as a grown up how to bike , but I am sure you can manage and you can start enjoying even more your Dutch life.

But remember, wherever you go with your bicycle, don’t forget to lock it. In The Netherlands about 500.000 bikes a year are stolen. Some will be resold, some will be “borrowed”, and some will just end up in a canal. Just for “fun”. That is why the municipality has to clean the canals regularly, to make sure that the boats can still navigate. Other then that, and owning some kind or rain protection, you are ready to enjoy life the Dutch “fiets”way!